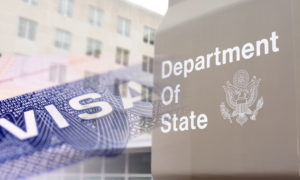 Charles Oppenheim, Chief of the U.S. Department of State (DOS) Visa Control and Reporting Division provided important updates at the Invest in the USA (IIUSA) 2019 EB-5 Advocacy Conference. The annual event was held in Washington, D.C. on May 6, 2019.

As noted by Oppenheim, EB-5 visas remain in very high demand by investors from Mainland China, Vietnam, and India. As a result of the continued demand, Oppenheim noted the following projections based on a “worst case scenario” for new investors who file a Form I-526 on May 6, 2019:

Oppenheim further offered the following predictions for the remainder of 2019 fiscal year and into the 2020 fiscal year:

Mainland China: The July 2019 visa bulletin is expected to advance to October 1, 2014. This date is not likely to increase unless the rest of the world demand decreases significantly. Beginning in October, which is the start of the 2020 fiscal year, the best case scenario for Mainland China would be October 15, 2014 final action date and the worst case scenario would be October 8, 2014 final action date.

Vietnam: The July 2019 visa bulletin is expected to advance to October 1, 2016 after which Vietnam will hit its annual limit and will revert to Mainland China’s date. In October, Vietnam’s best case scenario is December 15, 2016 while the worst case scenario would be a November 22, 2016 final action date.

India: Oppenhiem predicted that India will likely hit its annual limit by late June or early July. It is also possible that the July visa bulletin will list a final action date of 2017 or equal to China’s final action date.

South Korea, Taiwan and Brazil: No backlogs predicted in 2019 fiscal year. Expected to be current in October.

For more information on EB-5, contact us today and speak with David Enterline, a highly experienced U.S. EB-5 lawyer.