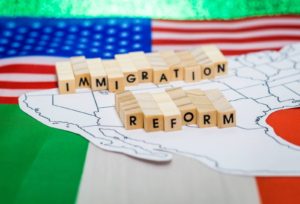 While this recent op-ed (opinion-editorial) article in the Los Angeles Times, focuses on President Trump and his ongoing war with the U.S. and Mexico border and its illegal immigration issues, the article points out that the Trump administration has, according to the American Immigration Lawyers Association (AILA), radically slowed the processing of immigration applications and immigration benefits. As AILA members and U.S. immigration lawyers, we see this radical effect sweeping through the whole of the legal immigration system. Long delays, head-scratching requests, embarrassing mistakes in issuing documentation such as I-551 “green cards”, and increasing inefficiencies are becoming the norm and not the exception.

This may lead to the perception that American has become anti-immigration and anti-immigrant. This is not the case. Certainly, there are some in the United States who are against immigration and do not want to welcome immigrants, but this is a minority and mostly only a vocal Trump base of supporters. Remember, the United States is a country of immigrants, a melting pot of people from all over the world, and it will remain so for many years to come. Its Immigration laws are set by Congress and are not controlled by whatever current administration is in power. Yes, a President has the power to influence, and in some extremely special cases, might enact an Executive Order in the name of National Security, but these situations are rare and more rarely are upheld by the courts.

At Enterline and Partners, we are experienced in representing our clients before the United States Citizenship and Immigration Service (USCIS), the U.S. Department of State (DOS) and its consulates, and other government agencies for all types of petitions and applications, whether it is an I-130 petition for a family member, an I-140 for an employment visa, and I-526 immigrant investor (EB-5) petition or the many non-immigrant visa categories such as the B-1/B-2, E-1, E-2, F-1, J-1, K-1, L-1 visas. Contact us and we will help you navigate through the process of going to the United States.